You would have thought that Elvis and Cliff's paths would have crossed, but apparently not!

Sir Cliff Richard has revealed that he regrets turning down an opportunity to meet his hero in the 1970s.

Speaking on The Jonathan Ross Show, Cliff said: “I was doing an interview in America when I was promoting ‘Devil Woman’ and the journalist said to me, ‘Your influences?’ and I said, ‘If there had been no Elvis, there’d have been no Cliff Richard’.

"‘Would you like to meet him?’ was the next question and I said, ‘Yeah I would love to meet him.’ He said, ‘I can arrange it but the photographs would have to be absolutely just for my newspaper’ and I said, ‘As long as I can have a copy at the end, that’s fine.’

"At the end of the interview he said, ‘Shall we arrange it?’ I said, ‘Let’s wait’ because Elvis had gone through a period of putting on a lot of weight and I just thought, if I’m going to have me and Elvis on my refrigerator, I’d really like him to look [good]."

He continued: "The thing is, I regret it now because he died not long after that. I think none of us knew that was going to happen.

"I was stupid really and I regret it to this day. I’d love to be able to say to you, ‘Yes I did meet Elvis’ but I didn’t.”

Cliff also opened up about his difficult few years, saying: "I’ve had four terrible years and it was horrific. My best quote is that I can say that I would never wish that on my worst enemy. It was tumultuous, horrific, emotionally draining, traumatic.

Sir Cliff releases his new album next Friday (November 23), and it will be his first album of new material in 14 years. The Jonathan Ross Show airs on Saturday night at 9.40pm on ITV. 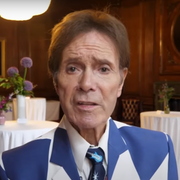