Alli Simpson: Australian actress and singer 'lucky to be alive' after fracturing neck in pool dive 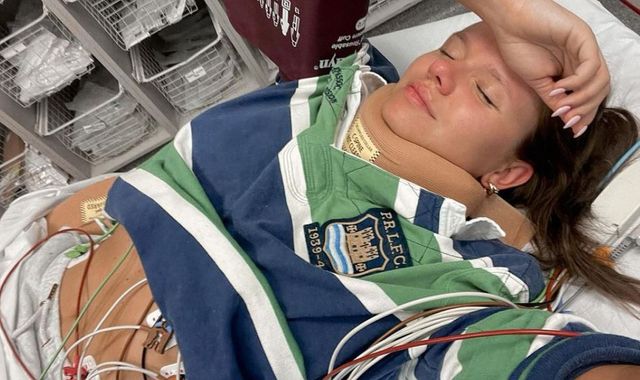 Australian actress, model, and singer Alli Simpson has said she is "extremely lucky to be alive" after breaking her neck diving into a pool.

The star, who is the sister of musician Cody Simpson, shared the news on social media, posting pictures and video from Gold Coast University Hospital in Queensland.

Simpson revealed she injured her neck diving into a swimming pool and that she will need a neck brace for the next four months while she recovers.

'I have been in endless tears'

She told her 1.2 million followers on Instagram that she has two severe fractures in her neck, just missing her spinal cord, and that she had medical scans following the accident on New Year's Eve and was assessed by a neurosurgeon.

However, luckily, she said she does not need immediate surgery.

"I have been sent home in a hard neck brace that I'll be living in 24/7 for the next 4 months as my neck hopefully heals itself," the star wrote. "I am extremely lucky to be alive and/or not quadriplegic as it JUST missed my spinal chord."

Simpson continued to say she will remain positive: "The way I see it, four months is a drop in the ocean when it comes to the rest of my happy & healthy life.. as you can imagine, I have been in endless tears and thanking every guardian angel watching over me in the pool that night plus every moment since.

"To say the least - I have a new lease on life & will be forever grateful that it was not worse!!"

Simpson also thanked paramedics and medical staff for their help, as well as friends and family for looking after her.

Who is Alli Simpson?

The 23-year-old is an actress, singer and reality star, who appeared in the Australian versions of The Masked Singer and I'm A Celebrity... Get Me Out Of Here! in 2021.

Her brother Cody is a musician who won Australia's The Masked Singer in 2019 and is also known for previously dating model Gigi Hadid and pop star Miley Cyrus.

Signing off her Instagram post, Simpson urged her followers to "stay safe" and not to "dive into anything when you don't know its depth".

Her photos shared included a picture of a positive COVID test, but she did not say how the virus had affected her.