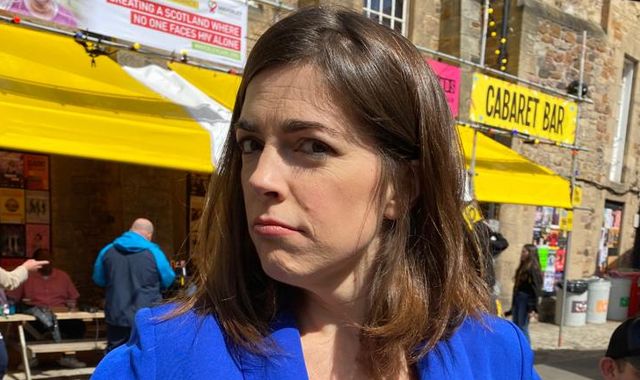 As Boris Johnson gets ready to bow out as prime minister, whatever your politics, satirists at Edinburgh's Fringe Festival are making the most of their one last opportunity to make fun of the man who has provided them with one or two punchlines, to say the least.

"There are times you think there isn't enough to write jokes about," admits comedian Matt Forde.

"And then, God bless the Tory Party, just before the Edinburgh Festival they give me a load of stuff to write jokes about.

"So on one level I'm deeply troubled, and on another I'm deeply grateful to Boris Johnson and the rest of them for helping me write this show."

For Rosie Holt - who fooled many with her spoof Tory MP videos created during lockdown - ahead of her Edinburgh run, the Conservative leadership race has offered her a chance to hone what she does best.

"Often... Scotland gets ignored," she told Sky News, speaking with faux concern as her MP character. "And it's hard for them because Nicola Sturgeon is quite attention-seeking. So I'm here to get my own bit of attention really, and, and spread the word about my leadership bid, which I feel has been quite ignored by the mainstream media."

The show must go on for Boris the Third - a play that reimagines a time when, aged 18 at Eton, the prime minister played Richard III.

Its writer, Adam Meggido, says events at number 10 have inadvertently made his drama - written months before - feel even more timely.

"Richard the third, of course, is a rise and fall story and when I first wrote the play there wasn't a fall," Meggido told Sky News.

"Now he's on his way out, it's a perfect rise and fall story. And it gives us a chance to reflect on what the last two years has been about."

Matt Forde: Clowns to the Left of Me, Jokers to the Right is on 2000 at Pleasance Courtyard Aug 6-28