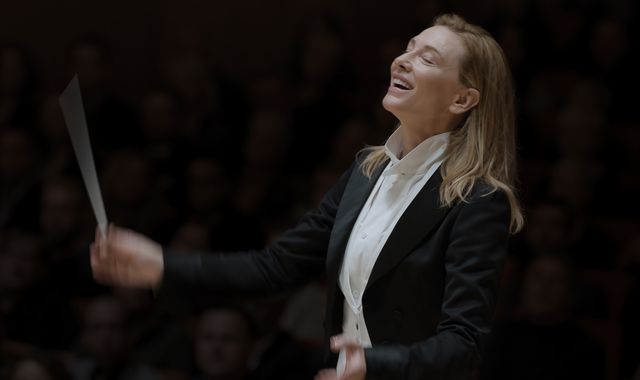 Cate Blanchett says playing fictional maestro Lydia Tar was a "once in a career" moment which required so much of her that loved ones questioned her sanity on a "daily" basis.

"I literally was having conducting dreams," the actress said, talking to Sky News. "I would wake up at 3.30 am and my hand was up in the air - we actually put that in the movie."

The film is about Lydia Tar, widely considered to be one of the greatest living composer-conductors and the first female director of a major German orchestra.

It is a thunderous performance that Blanchett gives in the lead role.

Aside from her quietly menacing acting as the autocratic conductor - worthy of the critical praise it's received and more - she faced the almost insurmountable task of having to play piano onscreen, speak fluent German and learn how to lead a live orchestra in order to bring this character to life.

She says the challenge "felt like being Prospero at the centre of the storm, you know, the power of that music when it comes back at you".

"It could have been very stressful and it was certainly challenging and daunting, but to have music come back into my life, because I hadn't played piano since I was a girl, was a gift so I would actually come home at the end of a really long day shooting and I would just play for relaxation to stop my brain from working," she added.

Described by some critics as a cancel culture thriller, her character faces the perfect storm of the weight of the internet turning against her.

Blanchett says social media is "not a nuanced beast".

"This is, you know, an examination of systemic power and how that is corrupting, no matter what your sexual persuasion or your gender orientation is," she says.

Her performance is a colossal achievement onscreen - making Blanchett the one to watch this awards season. Not that the double Oscar-winner will be drawn on the prospect of winning a third.

"You're being told to wrap it up," she laughs while wagging a finger to show our conversation stops here. Lydia Tar would be proud.

Tar is out now.