COVID: Hugh Jackman, Jimmy Fallon and Lupita Nyong'o among stars to reveal positive test results as Omicron surges in US 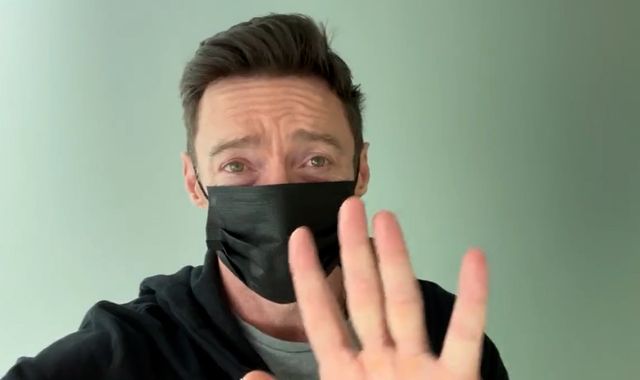 Hugh Jackman, Billie Eilish, and Jimmy Fallon are among the stars sharing their positive COVID test results to encourage others to get fully vaccinated.

It comes as the fast-spreading Omicron variant drives a huge surge in cases in the US, with more than a million reported in a single day this week - a world record.

Many familiar actors, presenters, and comedians have tested positive, forcing them to cancel shows and interviews.

In a 30-second video on Instagram, which has been watched nearly three million times, The Greatest Showman star said he was experiencing "mild symptoms" including a "scratchy throat" and a "runny nose".

He urged viewers to "please be safe, healthy and kind".

Broadway musical The Music Man, in which Jackman is starring, was forced to cancel performances until 6 January.

The Black Panther star announced her positive result on Twitter on Tuesday.

She urged fans to "please do all you can to keep yourself and others protected from serious illness" by wearing masks and getting vaccinated.

Virtual interviews to promote her new film The 355, which will also star Jessica Chastain, have had to be cancelled.

The host of US chat show The View was confirmed to have tested positive for the virus on Monday, when she was absent from filming for the first show since Christmas.

Her co-host Joy Behar reassured fans that Goldberg had "very, very mild" symptoms and will be fine due to being fully vaccinated.

The comedian and chat show host tested positive on the first day of his Christmas break.

He said how "lucky" he was to only have mild symptoms due to receiving a booster vaccine.

The 47-year-old went on to thank producers of The Tonight Show Starring Jimmy Fallon for "taking testing protocols seriously".

Posting a picture of himself in a mask in a sealed-off room on his Instagram, he said: "Thanks NBC...and also thanks for putting me in the "What 'chu talkin' about Willis?" isolation room when they told me the news."

The fellow comedian announced his show Late Night with Seth Meyers would be cancelled for the rest of the week after testing positive for COVID yesterday.

The 48-year-old tweeted to his five million followers that he felt "fine" and thanked his vaccines and booster for giving him protection from the virus.

He asked fans to tune into the show when it returns "to see what cool location we will try and pass off as a studio!!!".

The musician was forced to cancel his New Year's Eve performance in New York after testing positive.

In a statement to US magazine People, the DJ acknowledged the news was "disappointing to the millions of fans" and he had been excited to see in 2022 in his hometown in a "special way".

He wished his fans "a healthy and happy New Year".

Last month, the pop star told US radio show The Howard Stern Show that she had contracted the virus in August and struggled with her health for two months afterwards.

She told the radio host, "I want it to be clear that it is because of the vaccine I'm fine" - and added she "would have died" without it.