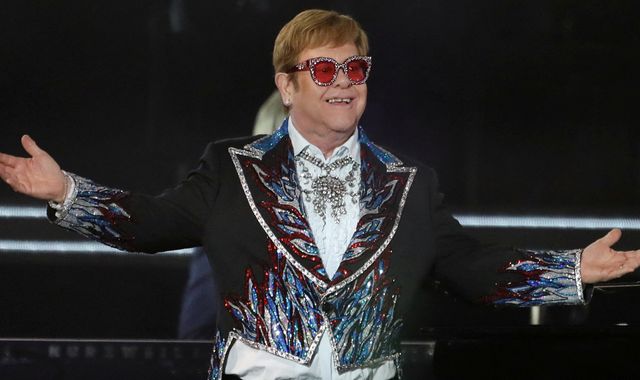 Sir Elton John has paid tribute to the "inspiring" musicians he has collaborated with throughout his lengthy career, and welcomed a surprise appearance by Dua Lipa during his final US tour show.

Pyrotechnics, spectacular visuals, fireworks and a confetti cannon all featured in the musical megastar's performance at the Dodger Stadium in Los Angeles, which concluded his North America Farewell Yellow Brick Road tour.

Donning a bejewelled jacket with large glittery lapels, the 75-year-old singer told crowds they were "making history with the first ever global livestream" and warned it was going to be "a very emotional night".

It also marked is first return to the venue in almost five decades, having last performed there in 1975.

He opened the show with the songs Bennie And The Jets and Philadelphia Freedom, before bombarding fans with a barrage of hits including Tiny Dancer, Rocketman, and I'm Still Standing.

In a tribute to the "lasting genius and legacy" of Aretha Franklin, Sir Elton performed Border Song, telling the stadium that the Queen of Soul's cover of the track had helped launch his stateside career.

He described meeting and performing with Franklin shortly before she died in 2018, saying it was a "surreal experience" and added that all the musicians he had played with "inspired" him "to play better".

As well as British superstar Dua Lipa, he also brought US singer-songwriter Brandi Carlile and English singer Kiki Dee on stage to duet with him.

'I wish you love and prosperity'

He and Carlile duetted on Don't Let The Sun Go Down On Me, which Sir Elton dedicated to late members of his band.

Dee performed her 1974 chart-topping song Don't Go Breaking My Heart, which the pair duetted on in 1976.

The main set ended with Sir Elton John singing the hit track Saturday Night's Alright, but moments after leaving the stage he returned for an encore.

Wearing a sparkling Dodgers-themed dressing gown, which was reminiscent of the outfit he wore during his 1975 show at the stadium, he invited Lipa on stage to sing a rendition of their song Cold Heart.

Sir Elton said he was ending his touring life to spend more time with his family, before bringing out his husband, David Furnish, and his two sons, 11-year-old Zachary and nine-year-old Elijah to further cheers.

"I wish you love and prosperity," he said as he started his final song, Goodbye Yellow Brick Road.

With his LA shows concluded, Sir Elton will next visit Australia and New Zealand before embarking on European tour dates.

The run will end with two special concerts at Vicarage Road, the home of Watford Football Club, of which Sir Elton became chairman in 1976, in July.