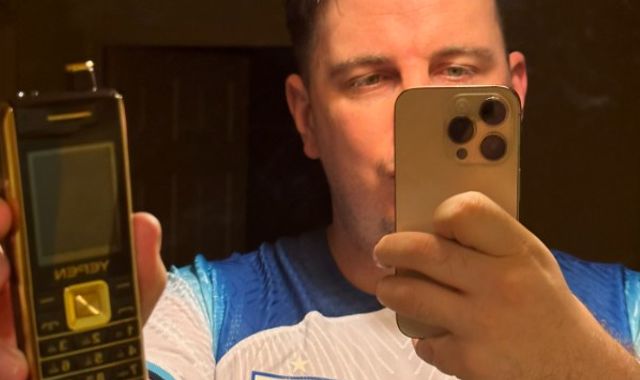 A YouTube prankster has claimed responsibility for a stunt on Match Of The Day which saw host Gary Lineker interrupted by a mobile phone playing pornographic noises.

Self-styled 'prank-star' Daniel Jarvis shared a video on Twitter apparently showing him in the BBC studio at Molineux Stadium ahead of live coverage of an FA Cup replay between Liverpool and Wolves.

He posted the footage along with the caption: "Yes, it was me that pranked the BBC Match of the Day with the sex phone!"

He also tweeted Lineker a selfie holding what appears to be the same phone used during the prank, saying: "It was me", along with a winking face.

Another video shared on YouTube shows Jarvis apparently ringing the phone planted in the studio - as Lineker struggles to maintain his composure before attempting to laugh off the incident.

The presenter later tweeted a picture of the mobile phone, telling his followers: "Well, we found this taped to the back of the set.

"As sabotage goes it was quite amusing."

The BBC has since apologised to viewers and launched an investigation.

No criminal offences occurred as a result of the transmission from Wolverhampton Wanderers' home ground, police said today.

West Midlands Police said: "We've liaised with the club and are satisfied that no criminal offences have taken place."

Jarvis, who uses social media handles @BMWjarvo and @Jarvo69, describes himself as "Britain's most wanted" on his YouTube channel, which currently has 176,000 subscribers.

He has built up a following after causing havoc on and off the pitch.

Jarvis successfully walked onto the pitch at the Stade de France and celebrated Real Madrid's win over Liverpool in May last year.

He is seen walking through the players' tunnel wearing a vest marking him as television crew before changing into a Real Madrid kit with the number 69.

He casually climbs over the barrier and onto the pitch, telling a bemused-looking Vinicius Junior "We done it, brother" then mingling with the rest of the squad, shaking hands with Gareth Bale.

He captioned the footage on YouTube: "I walked on the field and celebrated the Champions League Final with Real Madrid!"

Snooker rivals Zhao Xintong and Luca Brecel both struggled to keep a straight face during the 2021 UK Snooker Championship final after Jarvis apparently planted a device emitting farting sounds during the game.

The audience were implored to "settle down" after the "extraordinary noise" was played during the match at the Barbican in central London.

One commentator said: "I'm not sure what it was but (it) didn't sound too healthy."

Jarvis also shared footage of disruption during other snooker matches, making noises likened to a "whoopee cushion" and leaving the crowd amused but players unimpressed.

Jarvis attempted to make an unexpected debut for the England rugby team during a Six Nations tie against Ireland but it didn't go according to plan.

The self-styled comic is seen wearing a suit standing at the side of the pitch before taking it off and running onto the grass as the squad sing the national anthem.

He is spotted seconds later before being slammed to the ground and dragged away.

The YouTuber was next in hot water after a prank during an England versus India match at the Oval.

Jarvis, once again wearing a kit emblazoned with his trademark 69, jumped over a barrier and ran onto the pitch where he hurled a ball at a batsman, to the astonishment of players. During the incident, he collided with England star Jonny Bairstow.

Audience members applauded as he was escorted off the pitch.

Brush with the law

As a result, Jarvis was handed a suspended sentence last October after being convicted of aggravated trespass.

He was handed an eight-week prison sentence, suspended for two years, and was banned from attending any venue where a sporting fixture is being held in England and Wales for two years.

He was also banned from travelling abroad for 12 months and made subject to a rehabilitation activity requirement.