Comedian Eddie Large, best known for his comedy double act Little and Large, has died at the age of 78 after contracting COVID-19 in hospital, his agent has said.

The comic's family said he had tested positive for coronavirus, and his son Ryan McGinnis, posted on Facebook: "It is with great sadness that Mum and I need to announce that my dad passed away in the early hours of this morning.

"He had been suffering with heart failure and unfortunately, whilst in hospital, contracted the coronavirus, which his heart was sadly not strong enough to fight."

Click here for the latest coronavirus advice from the NHS

Comedians including Matt Lucas and Jason Manford have paid tribute to the comedian on social media.

Little Britain star Matt Lucas wrote: "Eddie Large (along with his supersonic friend Syd) was really lovely and kind and encouraging to me when I was a nipper on Shooting Stars. So sad to hear of his passing."

Jason Manford tweeted: "So sorry to hear about Eddie Large passing away. Came to every comedy and musical show I did whenever I hit Bristol and was always around for a chat about comedy and Man City afterwards. Such a gentle, funny man. RIP Eddie."

Eddie Large, whose real name was Hugh McGinnis, was born in Glasgow and grew up in Manchester.

He formed the double act Little and Large with Syd Little back in 1963. They famously won Opportunity Knocks, and had a long-running sketch show on TV in the 1970s and 1980s. 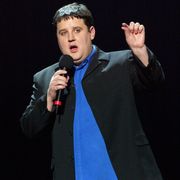 'Eleanor Rigby' by The Beatles: The making of the dark pop classic