The legendary stars' graves were vandalised with "offensive" graffiti on Monday night (October 26).

Both celebrities are buried at Allerton Cemetery in Liverpool, where the graves were vandalised overnight by unknown people.

Sir Ken Dodd's headstone had to be removed in order to be cleaned, the Liverpool Echo reports.

Cilla Black's headstone was repaired on site. However, it is not the first time the Blind Date star's grave has been vandalised. Soon after her burial in 2015, thieves stole a bronze plaque inscribed with her name from the site.

A post in a community Facebook group has claimed the graffiti was "offensive" but the exact details of the vandalism has not been confirmed.

A local council spokesperson said: "We were appalled to discover this morning that the graves of Cilla Black and Sir Ken Dodd had been vandalised overnight. Staff are carrying out repairs.

"We would urge anyone who has any information about the person or people responsible to contact the police."

Sir Ken Dodd died in March 2018 aged 90. He was buried alongside his mother Sarah and father Arthur, in a private burial service at Allerton Cemetery in Liverpool.

Cilla was buried near her parents, having passed away in August 2015, aged 72. 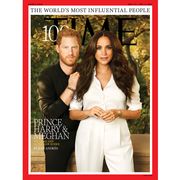 Time magazine names Harry and Meghan as among 100 most influential

The Shangri-Las' 10 greatest songs ever, ranked COVID-19: Professor Chris Whitty says Nicki Minaj 'should be ashamed' over vaccine tweet - as rapper hits back after 'diss'

Gold's Hall of Fame: The Who