You can stream 'You've Got A Habit Of Leaving' from David Bowie's upcoming Toy album right now.

Back in 2001 on the heels of his successful 'hours...' album and headlining performance at the 2000 Glastonbury Festival, David Bowie presented his new album Toy to his record label.

The record was a mix of brand new songs and re-recordings of some of Bowie's less well-known material from the 1960s and early 1970s.

Incredibly, EMI/Virgin decided that they didn't want to put out a David Bowie album, and he soon left the label, releasing his next albums Heathen and Reality (and eventually The Next Day and Blackstar) on his own ISO label, together with Columbia.

Some of the songs originally destined for Toy ended up on Heathen ('Uncle Floyd', renamed 'Slip Away', and 'Afraid').

Others were shunted to B-sides or bonus disc status ('Baby Loves That Way', 'Conversation Piece', 'Shadow Man', 'You've Got a Habit of Leaving').

A few more eventually saw the light of day on the deluxe edition of the 2014 Nothing Has Changed compilation ('Let Me Sleep Beside You', 'Toy (Your Turn to Drive)' and 'Shadow Man').

Somewhere in the middle, a "full" version of Toy leaked on to the internet in 2011, though it's not known if that was exactly the album that Bowie had been planning.

A remake of his 1965 single 'You've Got A Habit of Leaving' is available to stream now.

Slightly different from the 2011 leak, the official tracklisting of Toy is as follows:

Disc Two of the box-set continues:

Disc Three is made up of "Unplugged & somewhat slightly electric mixes" of the Toy songs.

Earlier this month, the David Bowie Estate announced a partnership with Warner Music, which added Bowie's work from 2000-2016 to the previous deal, which covered 1968-1999.

You’ve no doubt seen the announcement regarding the David Bowie Estate and WMG’s new deal (https://t.co/Feavk4iBD3) But, what about the Era Five Brilliant Adventure (1992 – 2001) it mentioned? Well, here’s the cover and the promise of full details before the end of the month. pic.twitter.com/U59EJWt0Re

The only missing period from the compilations will be 1988-1992, which covers Bowie's two studio albums and one live album with Tin Machine, as well as his greatest hits 1990 Sound+Vision Tour. 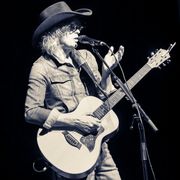 The Waterboys star Mike Scott on his one David Bowie regret, accidental rave anthem and performing at Glastonbury

QUIZ: How well do you know David Bowie's lyrics?