Elton John has given each frame in the eyewear range a suitably rock and roll name.

Elton John is almost as well known for his stunning glasses as he is his fantastic music, so it's maybe a surprise that he's taken so long to release his first eyewear collection.

The rock superstar has launched the specs range at Sam's Club and Walmart, working with the shops to develop the brand and personally name each frame, with titles like 'Rocketman', 'A-List' and 'Prodigy'.

"The line is designed to have something for everyone, so no matter who you are, you can always Look Yourself.

"It's not just about glasses, it’s about changing the way people see themselves."

The standard Foundations Collection contains 60 frames, 36 you of which you can only buy at Sam's Club and 24 you can only get at Walmart.

There are special frames available in Sam's Club's Capsule Collection, showcasing Elton's life story and journey and as a musician.

if you're after something even more collectable, The Master Collection recreates the frames worn by the man himself, with each limited edition pair being signed and numbered.

If you're getting the normal specs from Walmart, you'll also be doing your bit to help a good cause, as some of the profits will be donated to charity.

A minimum of $1 million will be donated each year from the collection to the Elton John AIDS Foundation to increase HIV education and awareness.

"Our customers and members are going to love this collection," said Walmart US executive Janey Whiteside.

"We’re thrilled to celebrate Elton John’s creativity and iconic style by launching a fun, on-trend eyewear collection that will help customers feel their best, all at an every day low price.

"On top of that, we’re proud to shine a light on the work of the Elton John AIDS Foundation and donate a portion of the sales to their important mission."

Beyond Eyewear, Elton is currently topping the UK album charts with his latest collaborations album The Lockdown Sessions.

He's currently on a short break from touring to recover from a fall, before he pics up his final Farewell Yellow Brick Road tour next year, which will include a massive show at London's Hyde Park. 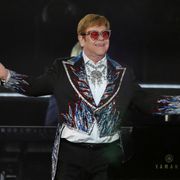