The Order of the Companions of Honour is restricted to the sovereign and 65 people.

Elton John has more racked up more awards and accolades than it's even possible to list, including countless Grammys and Brits, a couple of Oscars, a star on the Hollywood Walk of Fame, a Kennedy Center Honor and induction into the Rock and Roll Hall of Fame.

He was also appointed a CBE in 1995, following that up with a knighthood from the Queen in 1998.

You might think that there wasn't anything else for Elton to achieve, but yesterday (November 10) he picked up one of the most elite awards possible.

During a Windsor Castle investiture ceremony, Elton was formally made a member of the Order of the Companions of Honour by Prince Charles.

The award had previously been announced in the 2020 New Year's Honours, and now it's official: You can call him Sir Elton Hercules John CH CBE.

Having recently suffered a fall that caused the delay of the European leg of his Farewell tour, Elton needed to use a walking stick while at the ceremony.

"I've had an amazing life, music has been my life, and I got this for music and for work for charity.

Established in 1917 by George V in recognition of service of national importance, the Order of the Companions of Honour is limited to the sovereign and 65 other people at one time.

Sir Paul McCartney is another member of the order, as was Dame Vera Lynn before her death in June 2020.

Elton has received the gong not just for his incredible music, but also for his charity work – especially his work with the Elton John Aids Foundation. 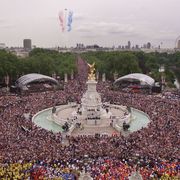