Sir Cliff Richard has spoken about his love for friend Olivia Newton-John, following her death at the age of 73.

Cliff and Olivia had a close relationship since they first met in the 1970s, and he once said he was in love with her.

Writing on Facebook, Cliff said: "I find myself at a loss as to what to say.

"I’m just one of an army of lucky people who knew and loved her. How could we not love her? She was gorgeous, gifted and had a heart of Gold. Also, a bunch of records that were Gold, but her Golden Heart is her legacy to us.

"When she was first diagnosed with cancer Livvy put her career on hold for years. Why? Because she wanted to inspire other sufferers to do as she did…fight the ugly disease, although she said in one interview that she wasn’t in a battle with cancer just that she had something that she simply wanted to get rid of!

"Olivia always had an up-beat approach to life. Only three weeks ago I was on the phone to her, and she was her bright positive self and I never thought for one moment of that call that I would be writing this and acknowledging her death. I hate that word!

"From now on I will only believe that our gorgeous Olivia simply stopped living. I will miss her. The world will miss her, so let’s all keep her alive in our hearts and memories.

Cliff met Olivia Newton-John in 1971 when he hosted his own TV variety show, and she was invited as a regular guest singer.

He said: “We hit it off straightaway. She was the sort of soulmate that you meet and you know is a friend for life.”

Olivia went on tour with Cliff as one of his backing singers, and she was even engaged to his Shadows bandmate Bruce Welch at one stage.

Cliff later said: “When I and many of us were in love with Olivia she was engaged to someone else. I’m afraid I lost the chance.”

ABBA, Elton John, Rod Stewart and John Travolta are also among those who have paid tribute to Olivia Newton-John, following her death from cancer on Monday (August 8). 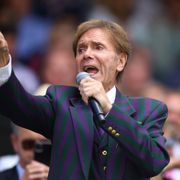 Frankie Lymon: The life and tragic death of the first teen idol